COLOMBO: Three Tamil Tiger rebels blew themselves up at sea yesterday after being caught with a cache of weapons, highlighting the legacy of mistrust from Sri Lanka's civil war just hours ahead of peace talks in Germany.

Two Nordic truce monitors and a translator jumped overboard to escape the explosion after boarding a boat to investigate weapons, including an anti-aircraft gun and hand grenades, officials from the Sri Lanka Monitoring Mission (SLMM) said.

“It was very clearly a violation of the ceasefire. It is clear the LTTE (Liberation Tigers of Tamil Eelam) were transporting these weapons,” mission spokesman Teitur Torkelsson said of the incident.

“The three set the boat on fire and blew themselves up. The monitors jumped into the sea and they are safe,” he said.

But a statement from mediator Norway said two days of talks to end 19 years of war that has killed 64,000 people had gone ahead in Berlin as planned.

“The ongoing session of peace talks will continue as scheduled,” the statement said.

“In co-operation with the SLMM, the parties will review existing procedures in order to avoid similar incidents in the future,” it said.

The Norwegian-brokered truce that is the basis for talks has been holding since last February, but most of the violations have taken place at sea, including an incident on the eve of November talks when six rebels were arrested on a boat carrying mines.

The monitors changed their sea operations in July after the Tigers held two monitors aboard a trawler to escape a standoff with the Sri Lankan navy.

The two were released unharmed.

Yesterday's suicide standoff began when the navy intercepted an Indian-registered trawler staffed by Tigers on Thursday and asked the monitors for help after the rebels threatened to swallow their trademark cyanide capsules if naval officers came on board.

Monitors waited until daylight to carry out their inspection, boarding the ship and discovering the stash of weapons.

Under the terms of the truce neither side is allowed to move military equipment into areas controlled by the other side and monitors said the navy has the right to safeguard the country at sea by inspecting such trawlers.

Government negotiators in Berlin for the talks were not immediately available for comment.

Talks in November went ahead despite the arrest of the rebel cadres and the sentencing of Tiger leader Velupillai Prabhakaran in absentia to 200 years in jail. – Reuters 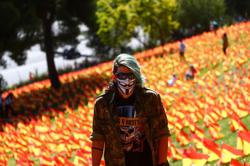