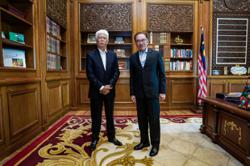 PUTRAJAYA: The proposal to abolish or reduce the pensions of Cabinet members is unreasonable because matters related to pensions are enshrined in the Federal Constitution, says Prime Minister Datuk Seri Anwar Ibrahim (pic).

"There are those who claimed that the unity government will consider reducing pensions, that is not reasonable because this is a constitutional issue and should be thoroughly looked into and consulted upon," he told a press conference after chairing the Cabinet meeting here on Wednesday (Jan 4).

Former Kangar MP Noor Amin Ahmad was reported saying that the government could save RM100mil to RM150mil in expenses every year if the pensions of former Cabinet members were abolished.

According to Noor Amin, based on the country's current system and the number of former Cabinet members eligible to receive pensions, the cost incurred for ministers, deputy ministers and parliament secretaries was between RM100mil and RM150mil per year.

Anwar, who is Finance Minister, said that the cost-saving measure implemented for now was the cancellation of vehicle provision for former ministers.

"So far, that is better (because) it involves administrative matters and does not involve the Constitution," he said.- Bernama