PUTRAJAYA: The detainees at the Kimanis Immigration Detention Centre who were seen in a viral video looking frail and malnourished may have already been like that before they were detained, says Datuk Seri Saifuddin Nasution Ismail.

The Home Minister said that it was unfair to "overplay" the issue before the full facts behind the video have been found.

"I am aware of the video that showed the alleged mistreatment of Immigration Department detainees.

"It is premature to assume the condition of the detainees was due to mistreatment.

"We have to see the subjects involved, see if they practised a good lifestyle or if they were involved in activities that have led to their bodies to look like that," he said.

The 90-second video also showed a person urging the authorities to release them and saying that the detainees were not given enough food and water. 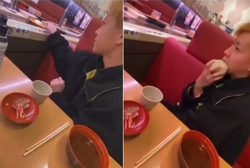