Sitti Saleha said all detentions and management of detainees in Sabah were in line with the provisions under the Immigration Act 1959/63 and Immigration Rules (Administration and Immigration Depot Management) 2003.

She added the department would ensure all detainees get the appropriate treatment and management in terms of food supply and medical treatment.

"Based on the viral video, it was found that the detainees' physical condition was exploited by certain quarters.

"As such, the department denies any occurrence of abuse towards detainees, particularly in the provision of food and medical treatment (as claimed) in the video," she said, in a statement here on Friday (Dec 9).

Home Minister Datuk Seri Saifuddin Nasution Ismail had earlier on Friday (Dec 9) said the detainees at the Kimanis Immigration Detention Centre who were seen in a viral video looking frail and malnourished may have already been in such a condition before they were detained.

Saifuddin said that it was unfair to "overplay" the issue before the full facts behind the video have been found.

The 90-second video also showed a person urging the authorities to release them, saying that the detainees were not given enough food and water.

Sitt Saleha said a majority of the detainees at the immigration depots were those who had completed prison sentences for involvement in various kinds of unhealthy activities.

Following the completion of their sentences in the state, she added, the detainees were then handed over to the Sabah Immigration Department for the purpose of deportation to their countries of origin.

"Immigration depots are also places to detain foreign nationals for investigations and to verify their actual citizenship status before being sent home to their countries.

"The deportation process can only be carried out once we get the confirmation from the embassies of their respective nations.

"Once obtaining the confirmation, the embassies will issue the relevant travel papers, for example travel documents for the Philippines' nationals and Sijil Perjalanan Laksana Paspor for Indonesians, as proof they were citizens of the countries concerned," Sitti Saleha said.

She disclosed that the deportation of Filipinos detained at depots in Sabah could only be done on Sept 6 this year due to the border closing in the Philippines, especially at the Zamboanga port due to the Covid-19 pandemic.

As of Dec 9 this year, she said 5,394 detainees were deported home by the Sabah Immigration Department consisting of 3,004 Filipinos, 2,166 Indonesians and 224 people of various nationalities.

"The public is advised not to issue any statement or spread any material on any platform in order to avoid speculation and provocation to the extent of jeopardising the duties of the Sabah Immigration Department as well as create public unrest," she said. 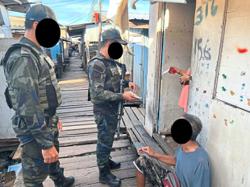