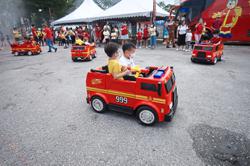 A lorry driver who was stuck in the 10-tonne trailer after an accident at Gunung Emas, was rescued by Fire and Rescue personnel on Friday. - Pic courtesy of Bomba

The Fire and Rescue Department received a report on the incident at the hilly stretch at 4.48am.

Edwin Generasi was driving a 10-tonne trailer loaded with fertiliser when he lost control of the vehicle and swerved to the side of the road, causing it to tip to its side.

“The victim was stuck in the lorry and was successfully extracted by the Fire and Rescue team using a power unit and rescue tools.

“He sustained major injuries and was handed over to the medical officer to be brought to the hospital using an ambulance for further treatment.

“The operation ended at 6.30am after ensuring there are no more other risks on site,” said the department spokesman.