JOHOR BARU: With the country now being under a unity government at the federal level, a Johor Pakatan Harapan leader is hoping that assemblymen from the coalition could be included in the state government.

Johor Pakatan deputy chairman Aminolhuda Hassan said governments at the state level, including Johor which is under Barisan Nasional, should also share the same spirit of unity as the federal administration.

“We now have a federal unity government and this should be reflected in the state governments including those that have held their elections earlier such as Johor and Melaka.

“We hope that Pakatan assemblymen in Johor can be included in the state government either as state executive councillors or other roles that could bring a positive impact.

“On top of that, we hope that MPs and assemblymen from Pakatan in Johor could also be allowed to sit in the district development action committee to ease administration,” he said when asked if there were any recommendations from Johor Pakatan for an agreement with the state government.

The unity government was proposed by the King when none of the political coalitions achieved a simple majority in Parliament following the 15th General Election.

Perak and Pahang are being run under a Barisan and Pakatan unity government.

He said the agreement, which is currently in the final stage of drafting, aims to increase the people’s confidence in the government, among others.

Aminolhuda, who is state Amanah chief, said any agreement with the state government should include measures to maintain peace and racial harmony in the country.

“We need to take stern action against any parties that bring up racial issues and statements that could disrupt public harmony or cause conflict among the people.

“Any agreement should also take this into consideration,” he added.

State PKR deputy chairman Jimmy Puah had appealed to the state government to allow Pakatan lawmakers to be included in the district development action committee.

However, on Sunday, Johor Opposition chief Liew Chin Tong told the state assembly that Pakatan would not be requesting changes to the assembly composition.

He said this was because Pakatan accepted the results of the state election held in March, which gave Barisan a two-thirds majority after it captured 40 out of the state’s 56 seats.

The Perling assemblyman did instead appeal to Johor Mentri Besar Datuk Onn Hafiz Ghazi and the state government to “forge a stronger bipartisan relationship for the good of the people”. 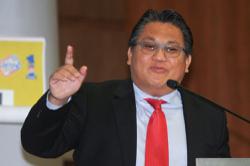