Some of the witnesses talking to Soosaimanicckam’s family outside court.

Former cadet, and a batchmate of the deceased, Christian Bernard Unto, 29, said he first met Soosaimanicckam during the ice-breaking session of their training at the KD Sultan Idris 1 (KDSI 1) camp in Lumut in 2018.

Christian, who broke down while testifying, said Soosaimanicckam was a positive, confident and a person filled with high spirits whose death did not seem to matter to the officers there.

ALSO READ: Naval cadet was disoriented before he died

Christian from Sabah, who is now a sales manager, left training a few weeks after Soosaimanicckam's death when he suffered rhabdomyolysis (serious muscle injury).

“Due to his body size, which was on the heavier side, and because he was slower compared to the rest of us during training, he was isolated and punished a lot in the first week of training.

“The officers picked on him, punched him in his stomach, pulled his T-shirt until it tore, and did not allow him recovery time despite him gasping for breath.

“His request to see a doctor was not entertained, despite me and another batchmate informing officers in-charge of his deteriorating condition,” he said in his testimony before Sessions Court Judge Ainul Shahrin Mohamad who sat as Coroner.

The Coroner’s Court is probing the cause of the cadet’s death during his training at the naval base on May 19, 2018.

Mahajoth Singh and Zaid Abd Malek of Lawyers for Liberty are representing Soosaimanicckam’s family, while Evangelin Simon Silvaraj is acting for the Malaysian Government.

Christian added that the rest of the cadets would get a recovery period after being punished but Soosaimanicckam was always the target of the officers, and they laughed while punishing him.

He claimed the officers also made fun of Soosaimanicckam and had once told him to do push-ups until he "mampus (died)".

“I was the one who helped him shower just before he died, his nose was bleeding profusely, he was foaming from his mouth, urinating and having diarrhoea.

“I panicked, asked for help from the other cadets, took him to the room, helped him put on his clothes, and while I was doing all that, I already knew he had died because he was not responsive.

“Only then did the officers quickly take him to the hospital, and later we were informed of his death.

“A higher ranking officer also told cadets, 'Don't tell the whole truth, and only say what needs to be said', and since I was close to Soosaimanicckam, I was subtly threatened as well,” he added.

Christian said he was never called to testify before the Navy’s board of inquiry, and that his police statement was just in the form of ‘’Yes’’ or ‘’No” answers, as he was not allowed to elaborate, and his proper statement was only given to Suhakam.

When Evangelin told Christian that the version of the other Navy cadet officers were totally different, and if that could be due to the fact that they were still in service, Christian said: “They are possibly scared, because it can be easy to get into the Navy, but it is very difficult to get out.”

Christian claimed that someone had called him before he went to Suhakam with an offer that he declined.

Another batchmate, Sammy Danielle Sitibun, 28 who also left the navy after suffering from tuberculosis (TB), said one day before Soosaimanicckam’s death, he had rubbed ointment on his back which had been bruised.

Sammy, who works in a bookstore now, said the bruises were either from getting beaten, or due to training.

“But the deceased told me he was beaten. On the morning prior to his death, I did see an officer punching him while he was isolated.

“He was almost in tears, but he held them back, and while going to get his body mass index checked, he was having difficulties breathing, but the officers were laughing at him,” he said, while breaking down in court.

Another four witnesses are expected to testify in the afternoon.

Naval cadet was disoriented before he died

Naval cadet died due to fluid in lungs, court told 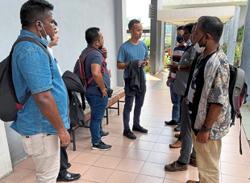