The meeting, the first one of the unity government Cabinet and attended by all the newly-appointed ministers, started at 10am Monday (Dec 5) here.

The Cabinet line-up, consisting of 28 ministers and two Deputy Prime Ministers, was announced by Anwar, who is also taking the Finance Minister's portfolio, on Friday (Dec 2).

Anwar was sworn in as the country's 10th Prime Minister on Nov 24.

Most of the Cabinet ministers clocked into their respective offices in the morning before attending the meeting. – Bernama 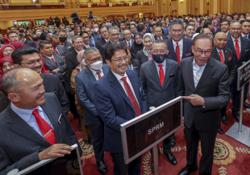