This was their first visit since Anwar took the oath of office as the 10th Prime Minister on Nov 24, Bernama reported.

According to a post on PDRM’s official Facebook page, the meeting, which lasted almost two hours, discussed current issues, and there was also a briefing on national security. 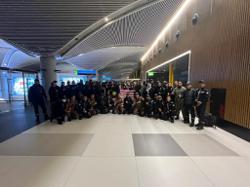