KOTA KINABALU: Parti Kesejahteraan Demokratik Malaysia (KDM) president Datuk Peter Anthony (pic) took the opportunity to apologise for whatever wrong words and actions that might have transpired throughout his campaign leading up to the 15th General Election (GE15).

He was giving his budget debate speech during the state legislative assembly sitting here on Tuesday (Nov 29), when he apologised without directly referring to any issue or matter.

“The general election has recently concluded and whatever that has happened in the past, I hope remains in the past,” he said.

“We are now in a new government and we hope we can all work together at the state and federal level to realise the budget and move Sabah forward to bring political stability and economic growth,” Peter said.

In representing the party and all its members, he said, "if there was anything wrong said and done, I apologise".

On Nov 5, a riot broke out at the Tenom nomination centre when Peter’s nomination was rejected hours after it was accepted by the state Election Commission.

A group of supporters had caused a ruckus, forcing security forces to use tear gas to disperse the crowd at around 2pm.

Earlier, Peter spoke on issues faced by his constituency of Melalap, which is under the Tenom parliamentary seat, including water and electricity supply woes, lack of shops, economic opportunities and lack of infrastructure development.

He hoped that the government would take steps to address these issues, for the betterment of the people of Melalap.

He supported the state Budget 2023 that was tabled in the assembly by Chief Minister Datuk Seri Hajiji Noor on Friday (Nov 25). 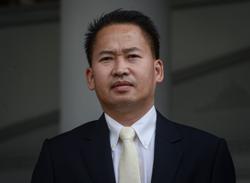