The meeting was to review the progress of cooperation between Malaysia and Brunei as well as to explore the potential for enhancing bilateral ties and cooperation for their mutual benefit, reported Bernama.

Sultan Hassanal is the first foreign leader to meet Anwar after his appointment as the 10th Prime Minister of Malaysia on Nov 24.

Anwar and Sultan Hassanal spent almost an hour at the meeting and exchanged souvenirs at the end, after which a luncheon was held.

Earlier, after the Sultan’s aircraft touched down at the Royal Malaysian Air Force base in Subang, about 41km from here, the Sultan inspected a guard of honour mounted by the Malaysian Army led by Mejar Mohd Faudzi Che Hashim.

His Majesty surprised everyone afterwards when he himself drove a car carrying his son and Anwar to the Seri Perdana Complex at 12.25pm for the meeting yesterday.

Anwar, who was seated in the front passenger seat of the car, was seen waving to the media at 11.45am.

The Sultan’s car was escorted by a team of police outriders and security vehicles.

According to a Wisma Putra statement, the Sultan’s last visit to Kuala Lumpur was from March 4-6, 2019, to attend the 22nd Annual Leaders’ Consultation between Malaysia and Brunei.

Malaysia and Brunei have a long special relationship through common heritage and culture as well as the people’s ties.

In 2021, Brunei was Malaysia’s 30th largest trading partner and the sixth largest in Asean with total trade worth US$1.94bil (RM8.03bil). 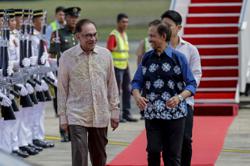