PASIR GUDANG: The police have arrested four men who are believed to be bookies taking bets for the Fifa World Cup here.

Seri Alam OCPD Supt Mohd Sohaimi Ishak said that the suspects, who are between 22 and 24 years old, were arrested during an operation held between Nov 22 and 27.

“Ops Soga IX was conducted to curb illegal betting activities in conjunction with the World Cup.

“A total of four raids were done between Nov 22 and 27 around the Johor Jaya and Ulu Tiram areas where we have arrested four local men believed to be bookies,” he said in a statement here on Monday (Nov 28).

He added that the credit limit for the bets was RM75,000.

“We have also seized four phones, believed to be used to record the bets and RM5,975 in cash,” he said.

In Batu Pahat, the police have also arrested a 31-year-old man for a similar offence.

“We have also confiscated a phone and RM185 in case. Checks on the phone found that the credit limit of the bets was RM8,000,” he said.

The cases are being investigated under Section 6(3) of the Betting Act 1953, which provides for a fine of not more than RM200,000, and imprisonment of not more than five years if convicted. 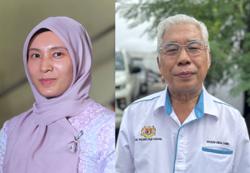