PUTRAJAYA: Prime Minister Datuk Seri Anwar Ibrahim (pic) on Sunday (Nov 27) chaired the 2022 National Action Council on Cost of Living Special Meeting which was attended by government departments and agencies to discuss the cost of living issues affecting the people.

The meeting started at 11am and a press conference is expected to be held immediately after that.

Last Saturday (Nov 26), Anwar reportedly said a meeting on the cost of living must be held immediately as there is an urgent need to address the issue.

He said the meeting will discuss several immediate and long-term action plans to overcome problems related to the cost of living.

Last Friday (Nov 25), in his first press conference after starting his official duties, Anwar stressed that the issue of the rising cost of living will be given priority by his unity government to alleviate the burden shouldered by the people.- Bernama

Anwar to meet govt depts, agencies to focus on cost of living issues on Nov 27 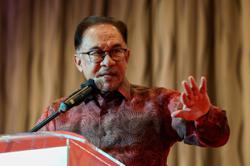