Najib’s suit against ex-AG struck out

KUALA LUMPUR: Datuk Seri Najib Razak’s lawsuit against former attorney general Tan Sri Tommy Thomas over alleged misfeasance in public office has been thrown out by the High Court, calling it “not sustainable” and a “non-starter”.

Allowing Thomas’s striking out application, Justice Ahmad Bache said Najib’s claims against Thomas were unsustainable and there were no reasonable causes of action in the first place.

“This court is of the considered opinion that the cause of action of misfeasance in public office and the so-called malicious process are not sustainable and a non-starter because the defendant did not even conduct the prosecution of the plaintiff’s cases and that he has resigned,” the judge said in an online proceeding here yesterday.

The country’s criminal justice system, said Justice Ahmad, came with a built-in check and balance mechanism whereby the fate of the person charged was not dependent on the acts or conduct of the public prosecutor but rather on the strength of the evidence adduced before the trial judge.He noted that the plaintiff was currently serving his sentence after being found guilty by another High Court judge, with the conviction and sentence also affirmed by the Court of Appeal and the Federal Court.

“That decision is a testimony and manifestation of the fact that the defendant had made the right decision to charge the plaintiff and was not reckless or negligent or commit the tort of malfeasance or malicious process and in so doing, and by extension, was right in preferring the 35 charges in the four cases against the plaintiff,” he added.

The judge said there was no necessity for Najib’s lawsuit against Thomas to go to a full trial, adding that the claims against Thomas ought to be struck out with RM12,000 in costs.

On Oct 22 last year, Najib filed the suit claiming that the charges against him were part of a move that had been planned in advance by Thomas as well as being in line with the Pakatan Harapan government’s plan at the time.

Najib, 69, claimed that he had been wrongly accused in court in the case of 1Malaysia Development Bhd, International Petroleum Investment Company (IPIC), abuse of power under the MACC Act 2009 and money laundering under the Anti-Money Laundering, Anti-Terrorism Financing and Proceeds of Unlawful Activities Act 2001.

He was seeking a declaration that Thomas committed misfeasance in public office as well as RM1.9mil in damages, including negotiation fees for the audit team to review documentation for the preparation of facts to deal with the prosecution against him.

On Nov 18, 2021, Thomas filed the application to strike out the lawsuit. 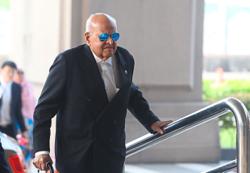