Dr Wee, in a post on social media, said he is disappointed by the alleged slanderous claims he was part of a meeting with Umno and PAS leaders at a country club in Petaling Jaya on Friday (Nov 25).

He explained that was at the country club on Friday after receiving an invitation from two entrepreneurs.

"It was to have dim sum for brunch at a restaurant located in the country club.

"When I arrived, I ran into former prime minister Datuk Seri Ismail Sabri Yaakob who was having breakfast at the cafe next to the restaurant.

"I greeted him before my friends arrived. When they (my friends) arrived, I went straight to the mentioned restaurant for brunch," he said in a statement.

The MCA president said he would like to repeat that he was not involved in any discussions with any political party representatives.

"MCA has expressed a clear position that it agrees with the order of the Yang di-Pertuan Agong to form a Unity Government. 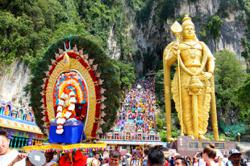