Ire of storm no threat to this tai chi ‘sifu’

A MAN who was seen showcasing tai chi moves in the rain outside a shopping mall in Penang went viral on social media, China Press reported.

The video, which is believed to have been shot in Pulau Tikus, showed a man unfazed by the rain and wind and appeared to be fully concentrating on executing the tai chi moves.

The man, who was seen dressed in a white shirt and dark trousers, took off his shoes midway and continued with his practice.

He soon attracted onlookers from nearby shops, but none of them attempted to disturb him.

When the video went viral online, Internet users were perplexed as to why the man chose to do this in the rain outside a shopping mall.

“He must be Zhang Sanfeng (the fabled inventor of tai chi),” a netizen quipped.

> China Press reported that Taiwanese superstar Show Lo, who recently returned to the music scene after a cheating scandal, brought his mother to the United States to prepare for his upcoming concert.

The 43-year-old is in New York City and shared a photo of him and his mother inside the plane cabin.

He later uploaded a photo of a digital advertisement in Times Square announcing his upcoming concert on Nov 27 at the Hard Rock Hotel in Atlantic City, New Jersey.

Lo was reported to have returned to the music scene this year following a two-year hiatus.

In 2020, Lo’s ex-girlfriend Grace Chow, who is an Internet celebrity in China, made an explosive social media post accusing Lo of sleeping with other female artistes under his wing.

Chow revealed that Lo would invite women to his hotel room on business trips and would bring women to their house when she was not present.

Lo has since made several public apologies for his behaviour and made fumbling attempts to win her back, but to no avail.

According to reports, the scandal cost him nearly T$600mil (RM87mil) in cancelled celebrity endorsement deals. 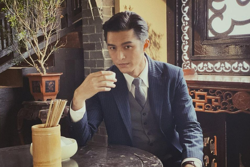