By PAVITHRA RAMAN and CASSANDRA VICTOR With only 30mins before the King's deadline, no political leaders have been seen arriving at Istana Negara yet.

It was reported earlier that the King had been seen driving out of the Palace through Gate 1 in an SUV around noon, and there have been no reports of His Majesty returning yet.

There have been no recent announcements from Istana Negara or any parties as of now regarding the candidate for prime minister and who has the majority support.

BN looks set to stay out of any coalition govt 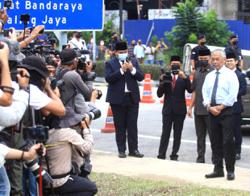