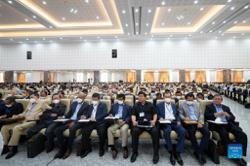 KUCHING: Former Betong MP Datuk Robert Lawson Chuat declined to seek reelection in the 15th General Election (GE15) on his own accord.

The one-term parliamentarian said there was no coercion or duress for him to step down.

"It was purely a personal decision in wanting to make way for a younger leader to take over.

"I believe I have reached the end of the road in my political career. It is time to make way for new leaders," he said at an election briefing for Parti Pesaka Bumiputera Bersatu (PBB) grassroots leaders in Spaoh town, near Betong, on Tuesday (Nov 8).

Chuat, 64, previously served two terms as state assemblyman for Bukit Saban, which is in the Betong parliamentary constituency, from 2006 to 2016.

He then contested and won in Betong in the 2018 general election.

In GE15, PBB is fielding newcomer Dr Richard Rapu in Betong on the Gabungan Parti Sarawak (GPS) ticket. He is facing a three-way contest with Pakatan Harapan's Patrick Kamis and Independent Hasbie Satar.

Chuat urged Betong voters, including the Undi18 cohort and new voters, to give their support to Richard.

"I have full confidence in Richard as a future leader for Betong based on his wide experience as a political secretary at both Federal and state levels.

"He has travelled extensively and is no stranger to Betong folk," he said.

Chuat also said Sarawak MPs had an important role in Parliament to continue fighting for the state's rights under the Malaysia Agreement 1963.

He said Sarawak's voice would be stronger if GPS could win all 31 seats in the state.

He thanked Chuat for his service and for stepping down voluntarily.

"This is a tradition in PBB whereby older leaders step down of their own accord to make way for new leaders," he said.