A mix of real and impossible promises 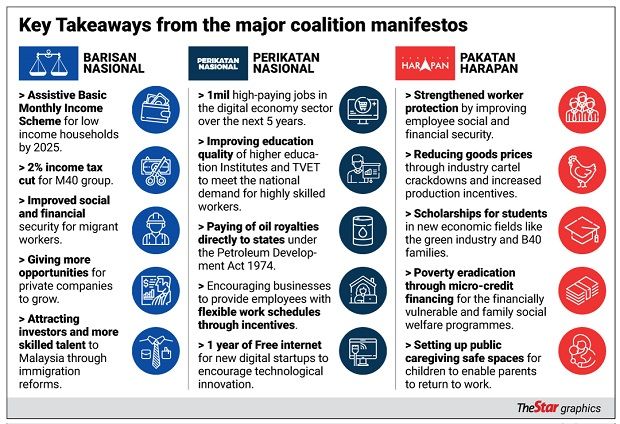 PETALING JAYA: Manifesto pledges are promises that must be fulfilled and not just be ploys just to attract votes, say economists after several promises made by Barisan Nasional, Perikatan Nasional and Pakatan Harapan.

They said some of the initiatives could be lauded as much-need solutions but many were just lofty promises.

ALSO READ: A road map for the future

Barisan Nasional’s Assistive Basic Income initiative, for one, came in for praise from Dr Shankaran Nambiar, head of research at the Malaysian Institute of Economic Research (MIER).

"I think the basic income approach has to be introduced in some form. Various governments have been pussyfooting with cash stimulus programmes and forms of handouts, but a basic income directed at those most in need will cut through all these tentative and ad hoc measures,” he said.

It would also give the most disadvantaged some economic certainty in their lives. "They will be able to plan their expenditure patterns,” he added.

Pakatan, he said, had come out with a list of initiatives to tackle key pressing issues including Malaysia as an aging society and the question of access to health and poverty.

"I like their take on the problems of senior citizens and post-retirement economic welfare. There has been little recognition of this and Pakatan’s sensitivity to the problem is commendable," he said.

He said there are several areas where both coalitions are on the same page.

"Education is one. The cost of living and a decent standard of living are other areas that both Barisan and Pakatan see as priority areas, though both choose to adopt different tacks,” he said.

Meanwhile, Prof Geoffrey Williams of Malaysia University of Science and Technology, said both Barisan and Pakatan had a similar pledge for PTPTN, with both wanting to relieve students from the B40 group of their burdens.

"The Perikatan manifesto is very weak and is just a long list of 234 handouts. Their policy on PTPTN to allow 25% discounts for second class honours students will slash repayments and make the PTPTN instability problems worse,” he said.

Prof Dr Barjoyai Bardai, professor emeritus at Universiti Tun Abdul Razak, said Pakatan’s manifesto promises this time can be delivered within five years, adding that the coalition may have learnt from its mistake in 2018.

While some of Barisan’s promises will be attractive to voters, some will take longer than five years to implement, he said.

For example, the question remains on how the Barisan will find the funds to finance the humongous cost of the Assistive Basic Income initiative.

He said initiatives such as developing Sabah and Sarawak, early childhood education, transformation of PTPTN, 5G internet coverage are grand ideas but are something that is needed.

"I think Barisan came up with a good blend of short, medium and long term strategies," he said.

Williams also felt the Assistive Basic Income pledge would set a minimum threshold of RM2,208 per month. It is hugely important in addressing poverty eradication. The threshold can be raised over time,” he said.

Meanwhile, former chairman of Khazanah Research Institute Dr Nungsari Ahmad Radhi questioned Barisan and Perikatan on why they did not implement some of their manifesto promises earlier when they were the government.

"Why were they not implemented or even initiated after the Sheraton Move in early 2020? Why only tell them now? Why not make them central in Budget 2021 or 2022? Why not the last 20 years?"

The Pakatan manifesto, he said, looked a lot like what they had promised in 2018, but with more credible policies.

PH building its campaign on manifesto 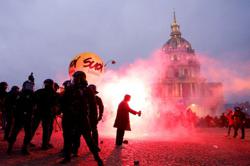