In a statement, Jamal dismissed Seputeh MP Teresa Kok’s claim that bankruptcy proceedings against him had commenced on Aug 30 and instead said that case management will only be done on Nov 30, adding that his lawyer will be challenging the matter.

He said he was in the appeal process with regard to the High Court’s order for him to pay RM300,000 as compensation and RM50,000 in costs to Kok for defaming her.

The Sungai Besar Umno division chief said Kok’s insistence that the Election Commission (EC) object to his potential nomination as a GE15 candidate was premature, futile and wrongful, as well as a desperate attempt to disqualify him as a candidate in the polls.

“The facts are very clear; I have not been served with any bankruptcy order in line with the Insolvency Act of 1967,” he said, according to Bernama.

Therefore, Jamal believes his eligibility as an election candidate remains valid on nomination and polling days until a bankruptcy order is issued and all appeals have been disposed of in accordance with his eligibility for nomination under Article 48 of the Federal Constitution.

Kok was recently reported to have sent a letter to EC chairman Tan Sri Abdul Ghani Salleh on Jamal being named as Barisan’s candidate in Sungai Besar, claiming that he has yet to settle the terms of a judgement in a suit she filed against him, which could potentially lead to him being declared bankrupt.

In July, Kok was awarded RM300,000 in damages after winning a defamation suit against Jamal over the alleged misuse of Yayasan Warisan Anak Selangor funds. 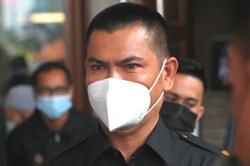