The Barisan chairman added that the coalition’s stand on this would not change if the coalition succeeded in getting to administer from Putrajaya.

Ahmad Zahid, who is also Umno president, said following BN’s stand, the question of whether Ismail Sabri would be BN’s candidate for the post of prime minister did not arise, but this was being played up by the Opposition.

"At the party level, the decision that Ismail Sabri is our 'poster boy' and candidate for the post of prime minister is final as decided by the Umno supreme council.

"The actions of certain parties are only aimed at causing friction, especially within Umno and among the BN component parties, as they have no other means," he said when met by reporters after opening the Bagan Datuk Umno meeting, here, Sunday (Oct 16).

Previously, there had been statements from certain quarters claiming that the incumbent (Ahmad Zahid) for the Bagan Datuk parliamentary seat would be named as candidate for prime minister if BN wins in GE15.

Umno secretary-general Datuk Seri Ahmad Maslan also reportedly denied a statement claiming that Ahmad Zahid had been named as candidate for the prime minister post that had gone viral on social media.

"As an individual with deep religious knowledge, he should not be using religion for a political purpose but using politics to instead strengthen the religion,” he said. - Bernama

GE15: Umno will find a seat for Khairy to contest, says Tok Mat

GE15: ‘Over and above’ preparations made in facing floods, says Hishammuddin

Sit out GE15 if you want to save people from voting, Penang BN tells Pakatan

GE15: PAS and Umno should avoid attacking each other, says PM 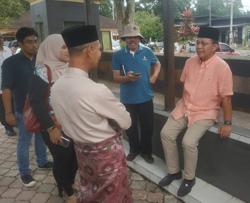