This is after Sabah Barisan chief Datuk Seri Bung Moktar Radin was reported to have said the two coalitions would work together for GE15.

He said the PBRS Youth was disappointed that the Sabah Barisan liaison body had not notified the party of any meeting by Barisan to decide on the cooperation with GRS.

“We are not against any cooperation between Barisan and GRS but at least we (PBRS) should be included (in the discussion) based on the spirit of camaraderie within Barisan,” he said in a statement.

“Unfortunately, the issue of working with GRS to face the next polls was never discussed in the Sabah Barisan meeting,” he added.

Besides Bung Moktar, GRS secretary-general Datuk Seri Masidi Manjun also confirmed on Wednesday (Oct 5) that Barisan and GRS would be partners for GE15.

Masidi said they were finalising seat-sharing arrangements to ensure victory for their respective candidates.

Bung Moktar said they would make an announcement about seat distribution when the time was right.

Towards this end, Laimin said according to the Barisan constitution, all decisions that involve the interest of the coalition must be made unanimously in the Barisan supreme council.

“As such, the PBRS Youth is urging that the cooperation with any party must be discussed and decided in the Sabah Barisan liaison committee meeting before the decision is announced,” he said. 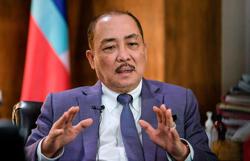