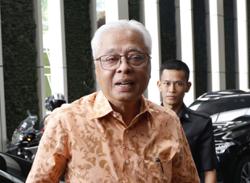 SHAH ALAM: It is solely the Prime Minister’s prerogative to recommend for the dissolution of Parliament in order to call for a general election.

Hence, there isn’t a need for other political parties to have a say over the matter, said Prime Minister Datuk Seri Ismail Sabri Yaakob.

Speaking to reporters after launching a townhouse meeting with youths at Universiti Teknologi Mara (UiTM) here Tuesday (Oct 4), Ismail Sabri said it wasn't the practice for political parties to opine on the matter or attempt to interfere in the process.

He added the onus was on the Prime Minister and Yang di-Pertuan Agong would be the one giving the green light.

As a matter of fact, he added, it was not even discussed with the prime minister’s own party.

Earlier in his speech at the event, Ismail Sabri said the government was always sensitive and concerned towards youths and ensured that they were heard and given the required attention.

“This is because youths have important idealism as they have been exposed to more progressive ideas obtained through Internet input from foreign and domestic sources,’’ said Ismail Sabri.

Dubbed the Idea Bina Negara 2022 (IBN), the townhouse was part of a digital platform intended for members of Keluarga Malaysia, especially the youths, to give their ideas and inspiration for the nation’s development as well as for the preparation of the upcoming Budget 2023.

According to Ismail Sabri, he was made to understand that the IBN application had received more than 12,000 ideas from youths nationwide.

“I am very happy because the biggest contributors of ideas, which is 57.9 per cent, are from youths between 18 to 21 years of age.

“Based on data and information received, it will help the government prepare initiatives and incentives suitable for the youths,’’ he said.