"The budget will definitely be tabled this Friday.

"That is my understanding as of yesterday (Sunday) night.

"If there are any changes after 10.30pm yesterday, I don't know," the Minister in the Prime Minister's Department (Parliament and Law) told a press conference in Parliament on Monday (Oct 3).

Wan Junaidi said he was among the last to leave a pre-council meeting chaired by Prime Minister Datuk Seri Ismail Sabri Yaakob prior to the start of the Dewan Rakyat on Monday.

"I was the last to leave and was with the Prime Minister and as far as I know, the Budget will be tabled on Friday.

"That is all I know and if there are changes, then that is beyond my control," he reiterated when pressed to provide an answer if the Budget would be passed during the coming Parliament meeting.

ALSO READ: INTERACTIVE: With GE15 imminent, here are all the laws passed by Malaysia’s 14th Parliament so far

He said that as minister in charge, he was bound to make any changes in Parliament if the government decides otherwise on the matter.

Talks are heating up over the possible dissolution of Parliament in the coming days following political pressure from Umno for early polls.

Meanwhile, Wan Junaidi noted that Budget 2023 would not be nullified if Parliament was dissolved before it was passed.

He said that the Budget would be deemed valid once tabled and read for its first reading.

However, he said the new administration, once in power after the general election, could nullify or make adjustments to the Budget. 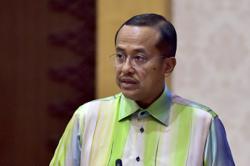