Cops investigating after duo on bike shoot at Manjung house IPOH: Police are investigating a case in Manjung where two suspects on a motorcycle had fired shots from a pistol aimed at a certain house.

He said the police received a call at 1.07pm from a friend of the house owner where the shots were fired in a residential area in Sitiawan.

“Police rushed to the site, and initial investigations found that the house owner stayed there with his wife and two children.

“The wife heard a loud explosion sound at around 12.45pm outside the house.

“The friend who was in their house at that time then went out to check, and found the back window of his friend’s car was damaged and found a bullet shell underneath the vehicle,” he said in a statement Saturday (Oct 1).

Comm Mohd Yusri said when the police got to the house, they saw a hole in the back window of the car believed to be from the shot fired.

He said the bullet shell as well as the head (bullet) were discovered.

“Checks on CCTV showed two unidentified men on a motorcycle without a registration number firing the first shot that hit the vehicle.

“They were about to fire a second shot aimed towards the house, but the pistol failed to function, and they fled the scene,” he added.

Comm Mohd Yusri added that the case is being investigated under Section 8 of the Firearms Act 1971.

“Those with information are urged to contact the investigating officer ASP Mohd Azalan Ab Karim at 019-392 7837 or the nearest police station,” he added. 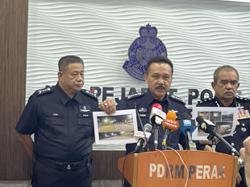