He said floods were nothing new to the east coast states of Terengganu, Kelantan and Pahang, but still it was important for the authorities to be prepared for possible massive floods.

"We have to learn from what happened previously, including in Selangor," he told reporters after the closing ceremony of a tabletop simulation on Kenyir Dam emergency action plan here on Wednesday (Sept 28).

"So, we have discussed a new standard operating procedure (SOP), in case the state is hit by unusual floods like what happened early last February.”

Tengku Farok Hussin, who is Terengganu State Disaster Management Committee (JPBN) Secretariat chairman, said they had asked the relevant agencies to revisit the SOP on evacuation of flood victims to make it more practical.

"We have suggested that the National Disaster Management Agency (Nadma) look into the possibility of enforcing any law on evacuation of flood victims," he added.

Meanwhile, Nadma deputy director-general (Operation Implementation Division) Meor Ismail Meor Akim said they would study whether it was possible to have laws on this matter.

"There are two (possibilities), having a regulation to compel flood victims to evacuate and to prevent them from returning (to flooded areas) as they wish.

"There were cases in Selangor where victims were safely evacuated but died after returning to their homes without informing anyone," he said.

A bigger exercise involving local residents will be held on Oct 26 in Hulu Terengganu as it is the area nearest to Kenyir Dam. - Bernama 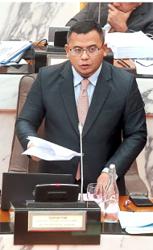