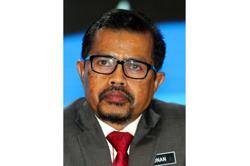 SEREMBAN: Cuepacs is hoping for at least a month's bonus for the country's 1.62 million civil servants in Budget 2023, says its president Datuk Adnan Mat.

He said the congress also wants the government to announce a new remuneration scheme for civil servants with a minimum basic salary of RM1,800.

"It’s been more than 10 years since we heard the word 'bonus' from the government as it has only been Bantuan Khas Kewangan or BKK (special financial aid).

"Civil servants have given their all in recent years including during the Covid-19 pandemic or whenever there was a change in government.

"We never once shirked our responsibilities and have been at the forefront as medical frontliners, to maintain peace and order, protect the sovereignty of this nation and be the first to arrive whenever there is a disaster," he told reporters after opening the Negri Sembilan Cuepacs triennial congress on Tuesday (Sept 27).

ALSO READ: Cuepacs: Some 50% of civil servants unable to own homes

Adnan said Cuepacs had no problem if the government wished to deduct the RM700 BKK announced on Aug 30 from the bonus.

He said Cuepacs was, however, grateful to Prime Minister Datuk Seri Ismail Sabri Yaakob for the slew of incentives announced on Aug 30 but these were still not enough to allow them to lead comfortable lives.

The incentives include an additional RM100 in the annual increment of public officers in Grade 11 until Grade 56 to be paid from January; increasing cash awards in lieu of leave from 160 to 180 days; and raising the special leave days for civil servants in education services to 15 days a year for those who have served more than 10 years.

Adnan said the current minimum basic salary for civil servants was RM1,208 and it was time this was raised to RM1,800.

"If you include the allowances, those who join the civil service at the entry level will get only close to RM2,000 a month.

"How are we even going to buy a house with that income?" he asked.

Adnan added that with an annual increment of RM80, these civil servants would only be able to earn about RM2,800 a month after serving for a decade.

"Can you imagine the price of a house then? The government wants GLCs and the private sector to give a minimum pay of RM1,500 to their employees but what about its own employees (the civil servants) who only get a minimum basic salary of RM1,208," he asked.

Adnan said under a new remuneration scheme, the qualification for entry point jobs should be upped to SPM as the Education Ministry has abolished the PT3 exam.

"Since there are no more exams in Form Three, the entry point qualification should be SPM and the entry grade should be 19, which gives you a basic minimum pay of RM1,800," he said.

Adnan also urged the Public Sector Home Financing Board to provide a moratorium in the event houses bought by civil servants were abandoned.

The board is a statutory organisation which provides housing loans to government servants.

“This is necessary as there are several projects which had been abandoned especially in Kelantan, Sarawak and Kuala Lumpur.

"In some cases, the board has made full payments to developers but the houses are not ready.

"When this happens, it will start deducting the monthly instalments from the salaries of the applicants although they are unable to move in," he said, adding that it was a double blow to the civil servants as they would also have to fork out money to pay rent.

Adnan also urged the board to go to the ground to check the progress of the projects before releasing payment to developers.