GEORGE TOWN: Some might call it fair warning from Mother Nature.

His fridge, television and sofa set were irreparably damaged on top of many important legal documents.

“I will be prepared in the future. It’s my first time facing a flood at home,” he said, pointing out that he moved in just four years ago.

Since the massive flood in November 2017, which saw homes in low-lying areas submerged up to the roof, Penang has not seen major flooding.

But now that the south-west monsoon is ebbing and an unpredictable inter-monsoon period has arrived, fuelled by the wet La Nina weather phenomenon, yesterday marked the first major flooding in many parts of Penang in years.

The downpour struck the south-east of Penang island badly and Penang International Airport, which is located there, was not spared either.

People at the airport shared pictures of the flight notice screen showing that three arriving flights between 8am and 8.50am – from Subang, Langkawi and Kuala Namu in North Sumatra – had to be diverted although it is unknown to where at press time.

“Flood waters receded by 10.15am and cleaning works were quickly completed within 15 minutes,” it stated.

It added that flight operations were not affected because the runway and taxiways remained clear of water, but several flight take-offs and landings were delayed during the heaviest part of the downpour.

Many videos shared by netizens showed that the road in front of the arrival hall could not be traversed by cars due to the flood while manhole covers and drainage holes were shown spewing water out onto the surface.

To make matters worse, it was low tide yesterday morning but the high volume of rain was still too high for the water to flow out to sea.

“When the rain started, the tide was less than 1m in the morning.

“The Federal Government built three screw pumps in Teluk Kumbar that can blast water out to sea at nine cubic metres per second. They are designed to automatically turn on during high tide.

“The Drainage and Irrigation Department turned them on manually, but the rainfall was just too heavy,” said state flood mitigation committee chairman Zairil Khir Johari.

In Jalan Mahsuri, Bayan Baru, four food delivery riders were spotted pausing from their work to help divert traffic in the rain.

Kashah Samsudin, 22, said he and his three friends saw the traffic clogging up and decided to help guide vehicles away from flooded sections of the road.

“We felt a need to do something to ease the traffic. We didn’t have orders to deliver at the time,” he said, adding that they spent two hours helping cars find shallow sections of flooded roads to move on.

Many of Penang Island City Council’s general workers were also spotted slogging away in the rain to clear flooded drains clogged by rubbish. 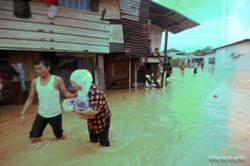