SHAH ALAM: DAP has passed a motion to amend its party constitution in relation to the anti-party hopping law and for elected representatives to toe the line on party decisions.

Its secretary-general Anthony Loke said all but two delegates to its special congress here on Sunday (Sept 25) voted in favour of the motion.

He said the amendments will be submitted to the Registrar of Societies (ROS) in the near future.

“We hope ROS will give its approval as soon as possible so that we can implement the amendments by the 15th General Election (GE15).

“We understand the amendments to the Federal Constitution have been gazetted and will be in effect soon before GE15,” he told a press conference after the special congress.

Loke said the amendments were needed to cover lawmakers who get sacked from the party.

Directives issued will be in writing, unless otherwise directed by the secretary-general.

On Aug 3, Loke said DAP was planning to amend its constitution to allow the sacking of elected representatives who do not toe the party line.

According to the anti-party hopping law passed in Parliament on July 28, MPs who defect from the party they represented as election candidates, or those who became independents, would have to vacate their parliamentary seats.

However, MPs sacked by their party would not lose their seats and MPs who voted against their party’s wishes in Parliament would not be affected. 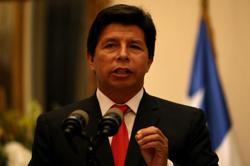