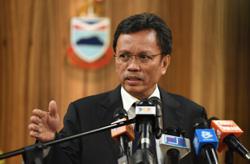 “We respect the court decision. A decision has been made and we respect it as it is the law,” he told reporters at Pulau Larapan in Semporna following the decision yesterday.

Dismissing suggestions of political interference in the case, Shafie said it would be contempt to question the court decision and under the law, the court had made a decision based on what was presented.

“We respect the High Court decision and if the prosecution wants to appeal it would be their decision under the law,” he added.

High Court judge Justice Mohd Yazid Mustafa earlier yesterday held that the prosecution had failed to prove a prima facie case against the former deputy prime minister and made the order for a discharge and acquittal of 40 graft charges in the Foreign Visa System (VLN) case.