Headhunter centre set to be new tourism attraction in Tuaran

KOTA KINABALU: Those intrigued by the culture of headhunters will be excited to know there is a one-of-a-kind new tourism attraction dedicated to documenting and preserving Borneo's headhunting past.

Located some 45 minutes’ drive from Kota Kinabalu, the Susui Sangod Borneo attempts to pique visitors’ curiosity with a dimly lit mini-exhibition room that is filled with a display of sword artefacts from a variety of different ethnic groups and the ones used by Japanese soldiers.

Situated within the popular Crocodile Farm, the Susui Sangod Borneo is run in collaboration with the Lotud Borneo Museum.

Padiman Jabau, the curator of the exhibition centre, said most of the items on exhibit were either personal keepsakes that have been handed down through generations or acquired from the Lotud Borneo Museum in its capacity as the artefact trustee.

"This Susui Sangod Borneo exhibition centre is not only one of a kind, but it is also a treasure trove of knowledge and history that should be shared with everyone, particularly the younger generation.

"This is done to ensure that the history of head hunters and the customs of Borneo's indigenous people are kept alive and not lost to time," he said, on Friday (Sept 23).

Sabah Tourism, Culture, and Environment Assistant Minister Datuk Joniston Bangkuai said Tuaran was poised to become a bustling tourism hub with the opening of yet another tourism attraction in the district.

Launching the exhibition centre recently, Bangkuai described it as an educational product that enabled visitors to understand more about the native heritage of Sabah as well as for locals to recognise the significance of their traditions.

In January, the Tuaran Crocodile Farm also signed a collaborative agreement with Lotud Borneo Museum and Chanteek Borneo to transform its unused longhouse space within the compound into the Momogun Heritage Lab.

The farm manager Engalbert Awing had previously said the Momogun Heritage Lab would function as a family-friendly activity centre that offers culturally based fun activities that children will enjoy such as weaving and beading.

The longhouse was utilised to showcase traditional dance performances to visitors as a side activity until tourism was shut down due to the pandemic. 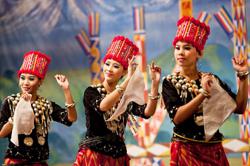