PETALING JAYA: The public should be informed about investigative findings in the littoral combat ship (LCS) controversy, says the Centre to Combat Corruption and Cronyism (C4).

Its executive director Cynthia Gabriel said the Malaysian Anti-Corruption Commission (MACC) had been silent on the matter and the people should be given an update on the investigation.

“At the same time, the MACC must explain whether or not investigations have been opened on any key figures involved such as Datuk Seri Najib Razak and Datuk Seri Dr Ahmad Zahid Hamidi,” she told a press conference at the C4 office here on Wednesday (Sept 21).

Gabriel also called for investigations into the hidden hands involved in a scandal of such proportions, noting that it could not have been a one-man show.

“Currently, only former Navy chief Tan Sri Ahmad Ramli Mohd Nor has been charged and this is incredibly disappointing given how evidence had shown that he could not have acted alone and was not even the key figure in orchestrating the scandal.

“The proceedings of the LCS probe are also... only available to those occupying the highest offices in government,” she said.

She also questioned the MACC’s silence on the Scorpene submarine scandal despite French authorities already having conducted their investigation and prosecution.

“Following in the French courts’ footsteps, the MACC must investigate the key figures involved here, who also include several of those involved in LCS,” she said.

As an interim measure, Gabriel said Parliament should establish a Special Committee on Defence Procurement that provides scrutiny on billion-ringgit procurement deals.

“Here, recommendations can be drafted for legislating the subject of defence procurement.

“Our main demand (is) for Parliament to draft a dedicated Procurement Bill for debate, with the corresponding Act to be passed as a matter of urgency,” she said.

As for the role of the government, Gabriel said Malaysia’s leaders must have the will to work together with the other nations' governments to open investigations against those involved.

“The transnational nature of huge corruption cases can no longer be ignored,” she said.

In August, Parliament’s Public Accounts Committee (PAC) revealed that almost RM1.4 bil of government allocations meant for the multibillion-ringgit LCS project was diverted for other uses.

On top of that, not even one of the ships has been completed although five should have been delivered in August.

A declassified report by the Special Investigation Committee on Public Governance, Procurement and Finance also revealed that Ahmad Zahid and Najib were involved in the LCS project from as early as 2010 and 2008 respectively. 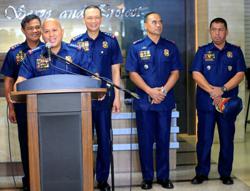