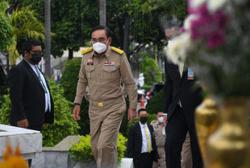 Both former prime ministers Thaksin Shinawatra and his sister Yingluck Shinawatra were seen at the Cecil Street market and a food court in Weld Quay on Wednesday (Sept 21).

Locals were excited to spot them at the Cecil Street market, and it was learnt that they both tried the famous pasembur.

It is also learnt that both of them were friendly and did not object when locals requested to take photos with them.

According to locals, they were escorted by the police wherever they went.

A controversial 2013 amnesty bill that would have paved the way for his return instead triggered street protests which culminated in the 2014 coup against Yingluck’s government.