GEORGE TOWN: Penang police have been organising operations to curb mat rempit activities in the state.

A spokesman from Penang police said the northeast district traffic department had an operation on Thursday (Sept 15) night.

"The police confiscated six motorcycles. A total of 15 compound notices were issued to traffic offenders," he said.

This came after a tragedy on July 17, when five men were killed and two motorcyclists seriously injured in an accident involving several motorcycles and two cars on the Tun Dr Lim Chong Eu Expressway.

He said there were currently only a few cases involving dangerous riding by motorcyclists who have been detained for further investigation.

"There were two or three arrests (involving mat rempit) but it was more about them trying to show off their superman-like stunts.

"We will not compromise and police will apply to remand them," he said at a recent press conference. 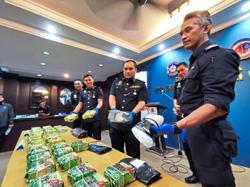