Woman pleads for son's rescue from forced labour in Cambodia

School teacher who wished to be known only as Tan, 42, showing photos received from her son in Cambodia, who is believed to being held captive in a job scam. — CHAN BOON KAI/The Star

GEORGE TOWN: A woman is pleading to authorities to rescue her son, who she claims has fallen victim to a human trafficking syndicate in Cambodia.

The school teacher who wished to be known only as Tan, 42, said it started in June this year when her son, 19, saw a job vacancy on social media and he took the offer.

"It was a position in a company to be a salesperson dealing with fashion apparel and manage stock keeping, offering US$10,000 in salary upon his return after 15 days.

"However, upon arrival at the airport in Cambodia, my son was held at gunpoint and taken to a secluded place where he spent 48 hours without contact there," said Tan during a press conference at MCA Penang headquarters in Jalan Transfer on Saturday (Sept 3).

Tan said she was informed of her son's ordeal after he got in touch with her through Facebook at his new workplace in an industrial park at Sihanoukville, a coastal city in Cambodia.

"My son had a mobile device and with Internet connectivity, we were able to get in touch almost daily.

"But due to him frequently being transferred between different places, it was difficult to track his whereabouts.

"On July 31, after police reports were lodged, Interpol and local authorities in Cambodia launched a raid but did not find my son," she said.

Tan said she last contacted her son on Aug 17 but could not determine his precise location.

Frustrated over many futile attempts to get her son out of the country, Tan is pleading for authorities to take serious action and save her son.

Tan said she was willing to cooperate by providing all information including many photos that her son had shared with her, including a photo in which her son claimed his leg was broken by his abductors.

Penang MCA public service and complaints bureau deputy chief Francis Goh said the team would assist Tan, who is from Kuala Lumpur, in her search for her son.

"We hope the Cambodian authorities will continue pursuing the case.

"At the same time, this case should serve as a reminder to others to not fall victim to such job scams by unscrupulous agents," he said. 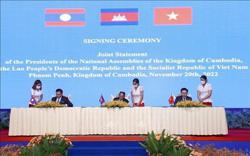