KUCHING: The Sarawak government is prepared to have additional State Legislative Assembly seats as currently, 108 seats have been made available at the assembly hall, says Speaker Tan Sri Mohamad Asfia Awang Nassar.

He said the population distribution at the district level based on the Malaysia Census 2020 enabled the parliamentarians and state assemblymen to determine the number of additional seats required.

"They should benefit from the census results for development planning and prosperity of the state towards a better life for the people.

"The statistics are very useful and it is up to the members of Parliament and state assemblymen to make use of the information for the well-being of people in their respective constituencies. We use statistics data to know how many more parliamentary and state seats need to be created.

"For example, the state seats of Senadin and Tupong with a high population of 132,000 and 91,000 respectively can be broken up. It is easy at the state level, but the big challenge is in the Dewan Rakyat as the (federal) government does not have a two-third majority,” he added.

However, Mohamad Asfia said additional parliamentary seats in the state could not be created in time due to the coming 15th General Election.

He was met by reporters today at the Parliamentary and State Assembly Constituencies Tour Series on Key Findings of the Malaysia Census 2020 and on Sarawak’s Gross Domestic Product (GDP) 2021.

The last demarcation of the Sarawak state constituencies was made in 2015, from 71 seats to 82.

Meanwhile, Mohamad Asfia said the Constitional (Amendment) (No.3) Bill 2022 on preventing party-hopping by elected representatives would be tabled at the State Legislative Assembly sitting this November.

Earlier, Malaysia’s chief statistician, Datuk Seri Dr. Mohd Uzir Mahidin when presenting the findings of the census on Sarawak, said the state’s GDP recorded a growth of 2.9% cent buoyed by the services and manufacturing sectors.

The Census 2020 commissioner also said that Sarawak recorded a population of 2.45 million with the annual average growth rate of 0.2% for the period of 2011 to 2020.

"The elderly (aged 65 and above) in Sarawak comprised 7.5 per cent of the state's population compared with 6.8% at the national level,” he added. - Bernama 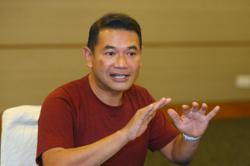