Najib: My right to a fair hearing, life and liberty at stake

PUTRAJAYA: Datuk Seri Najib Razak claims that his right to a fair hearing, his life and his liberty are at stake after his counsel were not allowed to discharge themselves.

The former prime minister, who gave a press conference after the proceedings ended here on Thursday (Aug 18), also claimed that he was effectively left with no legal representation as his counsel had been denied the time to go through the appeal records.

"I wish to record my objection in the strongest terms in the appeals proceedings today where my right to life, liberty and the right to a fair hearing are at stake," he said.

Earlier, at the beginning of the trial on Thursday, Najib's lead counsel Hisyam Teh Poh Teik made an oral application to discharge himself from representing Najib, following the Federal Court's dismissal of his application to stay the proceedings on Tuesday (Aug 16).

The discharge application, however, was denied by a panel of five judges chaired by Chief Justice Tengku Maimun Tuan Mat.

Hisyam then told the court that he would not be making any submissions on the 94 grounds of appeal filed in by Najib's previous counsel, effectively waiving the defence's right to begin the appeal hearing.

The panel then ordered for the prosecution to begin their submissions.

Najib said the dismissal on the discharge application resulted in a situation where his defence was not to be put across in court and only the prosecution was able to make their submission.

"In such a high-profile case, this is totally unprecedented, that in a criminal case, the defence is left without any counsel.

"I'm now left in fact and in reality without a defence counsel. That is the most unfortunate part," he added.

Hisyam, who also spoke to the media, said without an extension of time, his team was unable to effectively represent Najib.

"I can see no meaningful way that I can play as far as the proceedings are concerned because we are in fact not prepared," the senior lawyer said.

"So in essence, Najib has got no legal representation. That is the bottom line," he added.

When approached, a member from the prosecution team said that on record, Hisyam was still Najib's counsel and that he (Hisyam) was present in court throughout the proceedings. 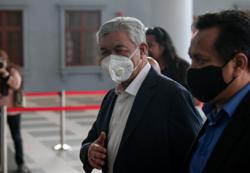