PETALING JAYA: The owner of the Crackhouse Comedy Club has been blacklisted for life from registering a business in Kuala Lumpur.

"We also decided to blacklist the owner of this club from registering a business license in Kuala Lumpur for life.

"This means he cannot register any business in Kuala Lumpur even if he used a different name (for a club) and company," he was quoted as saying by Sinar Harian on Wednesday (Aug 17).

On July 13, it was reported that the Crackhouse Comedy Club premises in Taman Tun Dr Ismail, Kuala Lumpur, was temporarily suspended by DBKL on July 10 after it was found that it did not have an entertainment permit from 2014 to 2017 and only had a restaurant and beverage license.

Jalaluddin was speaking at a press conference after leading an integrated operation between the police, DBKL, the Immigration Department and the National Anti-Drug Agency (AADK).

He said several clubs that have been detected carrying out similar activities around the capital are being closely monitored.

"Any business issued an entertainment licence must follow set rules.

"For those who violate licensing conditions will not be spared strict action," he said.

On July 13, a couple came under fire for an allegedly indecent performance at the comedy club's open mic night and then uploading a video of it on social media.

Siti Nuramira Abdullah, 26, and her boyfriend V. Alexander Navin, 38, were arrested and they pleaded not guilty to three charges in two separate courts.

Siti Nuramira was charged under Section 298A(1)(a) of the Penal Code with causing disharmony, disunity, or feelings of enmity, hatred or ill-will, or prejudicing the maintenance of harmony or unity, on the grounds of religion.

Both charges were filed under Section 233(1)(a) of the Communications and Multimedia Act 1998.

ALSO READ: ‘Siti Nuramira will not be prosecuted under Syariah law’

He faces a maximum fine of RM50,000 or up to one year imprisonment and can be fined RM1,000 each if the offence continues after conviction.

Not fair to suspend licence without prior warning, say comedy club founders 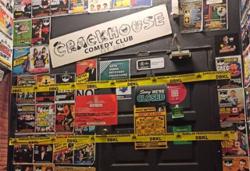