Wounded, maimed for our freedom 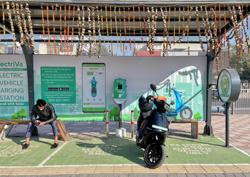 Sacrifice: Lee showing his prosthesis at the Esplanade Cenotaph in George Town. He lost his leg to a communist rebel mine in Kedah in 1979. — CHAN BOON KAI/The Star

GEORGE TOWN: His mission was to lay an ambush on the communists in the Ulu Sungai Seraya waterfall area in Gubir, Kedah.

Lee, 68, lost his left leg below the knee, having stepped onto a landmine near the Malaysia-Thai border during the second communist insurgency from 1968 to 1989.

“We were walking along a river bank, and suddenly, there was a blast.

“I was flung into the air and lost my weapon due to the explosion.

“I felt a sharp, searing pain, and the next thing I knew, my left foot was missing!” said Lee.

He was among 20 Penang Veterans’ Association (PVA) members present during a wreath-laying ceremony at Esplanade’s Cenotaph (Penang War Memorial) yesterday.

Despite the incident, his love for the country never wavered.

Recalling the fateful day on Oct 6, 1979, Lee said about 20 of them had just hiked for four days in the dense jungle using a compass.

“It was a sunny Saturday. We took a rest near a beautiful waterfall.

“I was sitting on a slope, and it was then that I saw footprints near the river beneath.

“A scout went to check and reported that the footprints were fresh, as the communists could have just left 15 minutes ago.

“I ordered the platoon to get tactical and ready to ambush the area downstream.

“While on our way down, I heard a click below my left foot, and the next thing I knew, there was a big explosion,” he said.

Despite bleeding profusely, Lee said he still had to tell his men to stay calm and alert for fear of being ambushed by the communists.

“There was a possibility of other landmines planted in the area.

“I was given two vials of morphine to relieve the pain while they hoisted me to open space.

“A helicopter was then called in to airlift me back for medical assistance,” said Lee, who retired in 2004.

The ceremony yesterday was in remembrance of those who had sacrificed their lives during World War I, World War II, the Malayan Emergency, Indonesian Confrontation and other armed conflicts.

PVA president Mejar (R) R. Sivarajan said they were grateful to the fallen heroes who, through sheer dedication and will, lost their lives defending the freedom and sovereignty of the country.

“Their loss of life is our gain of freedom. They are not just our countrymen but allies from the United Kingdom, Australia, New Zealand, Nepal and India.

“We honour all of them irrespective of nationality, religion, race or creed,” he said.

PVA was established in 2001. Since then, it has been catering to the welfare of its members and organising activities for the veterans.