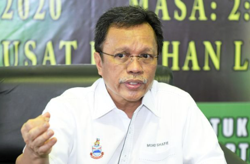 KOTA KINABALU: Three Parti Warisan divisions will have to attend as observers in the coming party annual general meeting (AGM) as their committee operations have been suspended.

Party president Datuk Seri Mohd Shafie Apdal said Beaufort division has yet to hold its division meeting, while Lahad Datu and Kota Marudu divisions had some irregularities during their meetings.

“There were some hiccups. The party leadership has decided to take these actions against these three divisions, so they cannot send delegates to vote during party elections.

“We want to avoid any conflict in party regulations as well as Registrar of Societies (RoS) requirements.

“We have asked the Beaufort division to do their divisional level meeting after the AGM, since the AGM dates are already near.

“Both Lahad Datu and Kota Marudu divisions will also be manned from the party headquarters, and their divisional meetings will also be based on the situation after the AGM,” he told reporters after chairing the party supreme council meeting in conjunction with the party AGM and elections this Aug 26 and 27.

He was asked to respond to the recent viral posts over chaos that ensued at the divisional-level meetings.

However, Mohd Shafie is confident that support remains strong for the party in these three divisions.

He added that they have also faced similar issues in Keningau and Tenom divisions in the past, where the central leadership undertook the division administration while waiting for the divisional meetings to be carried out.

Some 5,000 delegates from divisions across Sabah are expected to attend, as well as 500 party members from the peninsula as observers.

As of now, the top three party posts have been won without contest, namely the post of president which is retained by Mohd Shafie, Datuk Darell Leiking as deputy president, and the three vice-presidents, namely Datuk Jaujan Sambakong, Datuk Junz Wong and Datuk Terence Siambun.

The posts of secretary-general, treasurer-general and information chief are also via appointments, which will be done after the party elections.

During the AGM, Warisan is also expected to amend the party constitution to include the anti-hopping law recently passed in the Parliament.

Mohd Shafie reiterated the need to pass the law at the state assembly level, adding that any improvements can be done once the law is gazetted.

Asked whether Warisan has asked their divisions to come up with candidates names for the 15th General Election (GE15), he said, “Of course we have voiced this, yes divisions can forward (their proposed candidates) but the party leadership will determine the list.”

On any updates of political cooperation to face the election, he reiterated that Warisan will focus on strengthening the party first.

On the possibility of Warisan contesting in other states,

Mohd Shafie said they are looking at places in the peninsula where they have supporters but did not mention anywhere in particular. 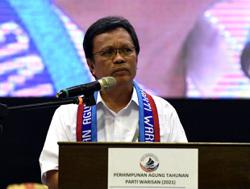