MELAKA: One district here managed to cut down on illegal racing by giving adrenaline junkies an avenue to test out their machines.

"We launched the circuit in February and received an overwhelming response from youths," he said in an interview on Saturday (Aug 13).

Dr Muhamad Akmal, who is also the Melaka health and anti-drugs committee chairman, said race events are frequently organised at the circuit and draws large crowds.

"Those from Merlimau are allowed to use the circuit for free and a minimal charge is imposed for outsiders," he said.

He said having similar circuits have been proposed in other districts to keep illegal racers off the roads.

"The Merlimau concept will be shared with other districts," he said.

He added that it was crucial for all racers at the Merlimau circuit to wear protective wear such as jackets, helmets, shoes.

He said they were also prepared for emergencies.

Dr Muhamad Akmal said having such circuits was not expensive but it should be done systematically to draw in racers.

He said youths possibly turn to illegal racing to let off steam and that the state government is willing to give them an outlet as long as they do not endanger other road users. 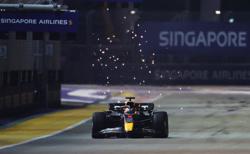