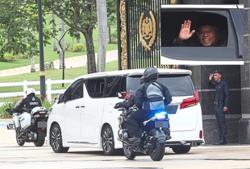 ISKANDAR PUTERI: Any well-founded allegation of wrongdoing or abuse of power should be investigated seriously without bias in order to combat such activities in the government, says a Johor leader here.

This was because the rakyat deserves an explanation about how public funds were being used by the government, said Iskandar Puteri MCA division chief Datuk Jason Teoh.

In backing Prime Minister Datuk Seri Ismail Sabri Yaakob’s call for the Malaysian Anti-Corruption Commission (MACC) to expedite its probe of the littoral combat ship (LCS) scandal, Teoh said immediate and appropriate actions should be taken against those in the wrong.

"The prime minister’s move shows that the Cabinet takes such accusations seriously while demonstrating his firm intention to establish a clean government.

"Once there is a conclusion to the investigation, the authorities should quickly bring the suspects to court," he said in a statement on Friday (Aug 12), adding that the public should also refrain from politicising the LCS scandal or poking fun about the matter on social media at this juncture.

He added that this kind of behaviour of taking advantage of the situation could disrupt the ongoing investigations conducted by MACC.

Regarding calls by various parties for a royal commission of inquiry to be formed by Putrajaya to probe the matter, Teoh opined that MACC should be allowed to carry out its investigations without the need for a double probe for now.

Teoh also urged those involved in the LCS scandal, ministers included, to give their full cooperation to MACC to ensure that a concluded report could be produced soon.

On Aug 4, the Public Accounts Committee released a 250-page report, tabled in the Dewan Rakyat, which revealed that RM1.4bil worth of government funds intended for the multi billion-ringgit LCS project signed in 2014 was diverted for other purposes.

Of the RM1.4bil, RM400mil was used to repay previous debts incurred under the New Generation Patrol Vessel project; RM305mil for an integration facility in Cyberjaya; and another RM700mil was a cost overrun that exceeded the LCS contract ceiling.

Another RM255mil worth of LCS equipment, which was kept in store for the project, was now obsolete.

This led to Ismail Sabri’s call on Aug 10 for MACC to expedite its investigations of the scandal and for the Attorney General to prosecute those responsible if there is proof of wrongdoing.