PETALING JAYA: With Malaysia now conducting fewer Covid-19 tests following the relaxation of protocols, the country’s positivity rate has shot up to 9.9% – the highest since April this year.

The positivity rate refers to the proportion of Covid-19 tests that return positive, and it was used as a guide during the height of the pandemic to see if a country is conducting tests adequately.

The highest positivity rate ever recorded in Malaysia was 15.3% on Aug 31 last year, during the peak of the Delta variant wave.

But with the country no longer conducting mass testing since it began its transition into endemicity, it has mainly come down to self-administered tests.

According to the Health Ministry’s CovidNow website, the number of Covid-19 tests conducted on Aug 6 was 26,238 – of which 21,755 were done with rapid test kits (RTK).

During the peak of the Omicron variant wave in February, the number of daily tests conducted was around 200,000 a day.

Since May this year, the number of tests conducted fluctuated between 20,000 and 50,000 daily.

Health Minister Khairy Jamaluddin has said that the under-reporting of results is expected as testing protocols are not as strict as before, since Malaysia entered the transition to endemicity phase.

He, however, reminded the public that reporting a positive test result on the MySejahtera app is still required by law.

Since the country’s reopening, the ministry has also shifted its focus to keeping hospitalisation and severe case numbers under control.

It has also changed its reporting of Covid-19 cases from daily figures to a weekly analysis published by Health director-general Tan Sri Dr Noor Hisham Abdullah.

The latest weekly figures from epidemiological week 31 (from July 31 to Aug 6) saw a slight increase, 0.8%, in new cases and a 22.4% jump in the number of deaths compared with the week before.

The number of admissions to hospitals and quarantine centres was 12 per 100,000 population – the same as the previous week.

The percentage of occupied beds in intensive care units nationwide remained unchanged at 14%.

Experts: Not the time to take Covid-19 lightly 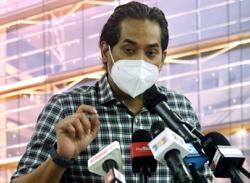