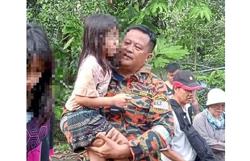 Some of the children with firemen and villagers after their rescue in Kota Belud.

KOTA KINABALU: Seven children, who were missing for 16 hours in a forested area in Sabah's northern Kota Belud district, were found safe and huddled together but in a weak state.

The five children and two teenagers, aged three to 15, were reported missing since 3.30pm on Sunday (Aug 7) were found in the forest of Kampung Kubang at 7.30am Monday (Aug 8) by search and rescue teams.

Kampung Kebayu Village Development and Security Committee (JKKK) chairman Lery Joba Midih said all them of them were weak as they had not eaten anything since Sunday afternoon.

Three of the seven children were persons with disabilities.

"When they were found, they were all safe but in a weak state, probably because they hadn't eaten since yesterday afternoon.

"They said they wanted to see a road construction area near Kampung Kubang here, but got lost in the forest," he said.

Lery said according to the children, they decided not to try and return home once it got dark and spent the night in the forest.

"They stayed together, cuddling each other," he added.

A Sabah Fire and Rescue Department spokesman said the second day of search operations began at 7.16am.

He said all the victims were found in a forested area and were immediately brought back to Kampung Kebayau for further action.

"They were handed over to paramedics and rushed to Hospital Kota Belud for examination and treatment," he said, adding that the rescue operation ended at 9.30am.

The children's disappearance was reported by family members after they failed to return home by nightfall.

All of them were reportedly last seen together at 3pm on Sunday at a grocery store in the village.

It is understood that four of the missing victims are siblings, namely Freddy Kerinsuk, 15; Arni Kerinsuk, 13; Alistar Kerinsuk, nine; and Royce Kerinsuk, three.