SERDANG: Those directly involved in the ecosystem for production and sale of palm-based cooking oil should avoid hoarding or rationing the commodity following the setting of its maximum price at RM34.70 per five-kilogramme bottle effective on Monday (Aug 8), says Tan Sri Annuar Musa.

The chairman of the Task Force on Jihad against Inflation said if traders and retailers resorted to such practices, they would ultimately lose out, apart from creating problems for consumers.

"Just because the price of oil will drop, for example, people should not start hoarding. It won’t solve the problem," he told reporters after visiting the Agriculture, Horticulture and Agrotourism Exhibition (MAHA) 2022 at the Malaysia Agro Exposition Park Serdang here on Sunday (Aug 7).

He said this when asked on the possibility of irresponsible parties hoarding cooking oil when its price is low, a practice which could lead to a shortage of supply in the local market.

Annuar also advised those concerned to steer clear of any activities which are against the law and to abide by the government’s decision in placing certain goods or commodities under the maximum price list.

Meanwhile, Annuar said it was apparent that cooperation among agencies had produced a positive impact as some supermarkets had begun reducing the price of unsubsidised bottled cooking oil although the ceiling price would only come into effect tomorrow.

"So far I am very satisfied because after the announcement on maximum price for cooking oil, many have reduced the price to below RM34.70 even before Aug 8.

"Yesterday, in Melaka I saw chicken being sold at RM7.99 per kilogramme although the ceiling price is RM9.40.

"That means we can do it (reduce prices) but we need the cooperation of all parties," he added.

The government has set the ceiling price of unsubsidised pure palm-based cooking oil at RM34.70 per five-kilogramme bottle effective Aug 8.

The price of cooking oil will be set each month and announced by the Malaysian Palm Oil Board (MPOB).

On MAHA2022, Annuar said its focus was on aspects of technology and digital applications in agriculture, which play an important role in ensuring food security in the long term.

The government would continue to encourage farmers to apply elements of technology in agriculture as digitalisation had been gaining priority in all aspects, he added. - Bernama 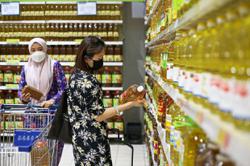