Swift justice on the cards KUALA LUMPUR: With the Anti-Sexual Harassment Act in place – and a promise that any case brought to the tribunal will be settled within 60 days – more victims are likely to come forward with their complaints.

A survey conducted by the Women, Family and Community Development Ministry (KPWKM) showed that over 80% of the respondents felt confident about reporting cases.

“The objective of this law is to make everyone aware that sexual harassment is not a trivial matter,” said minister Datuk Seri Rina Harun.

“The victims suffer trauma, phobia and fear, which further affects their daily life, productivity and well-being,” she said.

“We must not normalise sexual harassment. It must be stopped immediately. 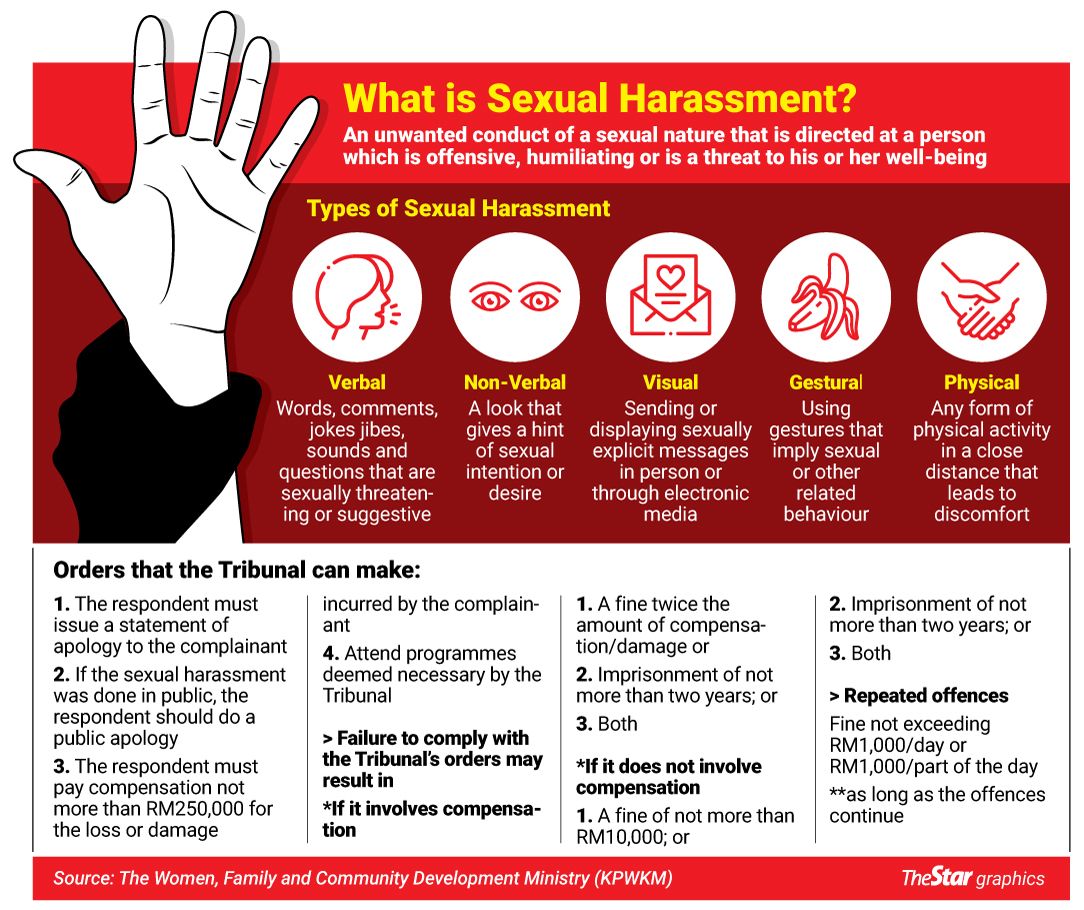 “We hope that when the law comes into effect, cases of sexual harassment will decrease and victims will know that they have an option to seek justice,” Rina told a media briefing on the recently passed Bill here.

Rina said it would be easy and safe for victims to file their complaints.

“The method of reporting will be made simple and the cost will be minimal. An outcome must be achieved within 60 days from the first day of the tribunal’s hearing.

“The tribunal will hold hearings behind closed doors and we hope the confidentiality factor will give complainants more confidence to come forward,” said Rina.

At a presentation during the briefing, ministry deputy secretary-general (strategic) Chua Choon Hwa said the tribunal’s system would be easier to administer compared to a court system.

“The tribunal system does not require both the complainant or respondent to have legal representation, so this will not be a financial burden to anyone.

“As the tribunal is a civil system, the burden of proof will be on the balance of probability, whereas if it was a court case, one would have to prove the case beyond reasonable doubt,” said Chua.

“A lot of sexual harassment victims are reluctant to come forward and report cases because it is hard to prove in court and the proceedings are lengthy.

The tribunal will comprise a president and deputy president, who will be appointed from among members of the judiciary.

The remaining members will be made up of former members of the judiciary or experienced practising lawyers and those with expertise in sexual harassment laws.

Rina said the ministry hoped to get the tribunal up and running within a year.

“This is a new law, not an existing Act that was amended, so it will take time to set up related guidelines.

“To set up the tribunal, we need to appoint its members, so this process will have to involve the Public Service Department and other agencies.

“In the meantime, the ministry will kick-start with advocacy programmes to spread awareness on the issue to the public, so that more people will understand what sexual harassment is and they will know what they can and cannot do,” said Rina.

If passed, the Bill will be presented to the Yang di-Pertuan Agong for royal assent before being gazetted for enforcement.

Women’s groups: Tribunal must be diverse

Tribunal is meant to be more ‘victim-centric’