Kids can learn all about ‘turtle power’ in a fun way Labour of love: Shepherd (left) and Chen with their dual-purpose colouring book.

PETALING JAYA: It’s been a long labour of love for two conservationists as they worked on a children’s book about freshwater turtles.

Loretta Shepherd and Dr Chen Pelf Nyok, both with a combined experience of more than three decades in the field of turtle conservation in Malaysia, have now produced a colouring book.

But Turtles of Malaysia is more than just that – it also doubles up as an educational book for children aged seven and above.

Shepherd is a former Malaysian journalist turned conservationist who, over the years, has been actively involved in Malayan tiger conservation as well as the wildlife rescue and rehabilitation of mainly tortoises.

She is now the communications coordinator for the Monitor Research Society.

“I strongly believe that teaching kids about unknown species is key to changing the future for wildlife,” she said.

For Chen, this bilingual book – in English and Malay – that took six months to produce is a channel to impart knowledge in highly accessible manner.

“When we talk about turtles, people generally assume we’re talking about sea turtles.

“There’s so much more that we should do to raise awareness of our freshwater turtles, hence the book.

“We wanted to produce a book that is not only educational for children, but equally beneficial for parents, guardians and teachers.

“Chances are, most adults in Malaysia do not know that we have 18 incredible freshwater turtles and tortoises,” said Chen, who has been a freshwater turtle researcher and conservationist since 2004.

For her efforts, she was named the Commonwealth Point of Light for Malaysia by Queen Elizabeth II in 2018.

Turtles of Malaysia is available now at Lit Books at Tropicana Avenue here, other than Shopee. 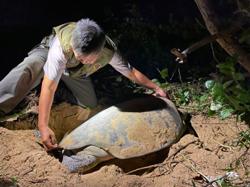