KOTA KINABALU: In a bid to curb lopsided deals, the Sabah government wants an immediate review of all agreements and contracts involving non-performing state agencies and government-linked companies.

Chief Minister Datuk Seri Hajiji Noor also directed officers of Sabah agencies and GLCs to ensure that any agreement or contract signed must be in the interest of the state.

"This also includes legal officers who must look through and carefully read every line of the agreement," Hajiji said when chairing the Yayasan Sabah board of trustees meeting on Monday (July 4).

Hajiji did not specify the agencies or GLCs involved.

During the meeting, the Chief Minister also announced that Yayasan Sabah's investment arm Innoprise Corporation Sdn Bhd (ICSB) had posted a pre-tax profit of RM424mil in 2021 compared with RM112mil in 2020.

"This increase is RM312mil or four times from the year before. This makes it the highest increase recorded by ICSB over a period of nine years," he said in a statement.

Hajiji also said ICSB subsidiaries empowered should not to be a burden to the Sabah Foundation.

"This will attract more new students and open up opportunities for more Sabahans to further their education, in the technical field particularly," he said. 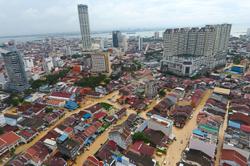