KAJANG: A worker suffered burns to his head and body after a hardware shop caught fire along Jalan Reko here.

Selangor Fire and Rescue Department director Norazam Khamis said they received a call about the incident at 1.08pm on Sunday (July 3).

"We dispatched fire engines and water tankers from the Kajang and Bangi fire stations as well as a fire engine from the Semenyih fire station along with nine firemen,” he said when contacted.

"They arrived at the scene at 1.13pm and found that the storeroom was on fire," added Norazam.

He said firemen managed to rescue a 35-year-old worker who was unconscious, adding that the man suffered burns to his head and body.

"The fire was successfully controlled at 1.32pm and," he said. 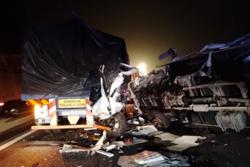