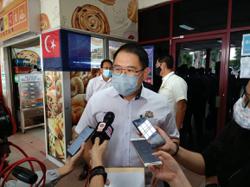 KLUANG: There is a steep decline in the number of hand, foot and mouth disease (HFMD) cases in Johor for the 26th epidemiological week (ME), says state health and unity committee chairman Ling Tian Soon.

"However, the number has dropped significantly to only 366 cases.

"I would like to thank the Johor Health Department for taking the right approach to curb the issue," he said during the state-level launch of MyChampian at Dewan Tunku Ibrahim Ismail here on Sunday (July 3).

On a separate matter, Ling said that there had been an increase in the number of influenza-like illnesses (ILI) and upper respiratory tract infections (URTI) in Johor recently.

"A total of 1,188 such infections were recorded during the 26th ME compared with 574 cases during the corresponding period last year.

"The number of clusters for the infection stands at 12,” he said.

He noted that ILI and URTI are normal infections that happen throughout the year.

"It only requires the patients to be monitored and to practise self isolation. Based on observation by the Health Department, the situation is under control.

"We urge the public to maintain good hygiene and maintain distance from those who have symptoms," he said.